I’m back from a month in Italy, with record temperatures, and I have to say that every day was a good day for a spritz.

The first time I spotted a spritz, 20 years ago, was on a hot summer day in the town of Reggio Emilia, when I suddenly noticed that many people in the piazza were drinking a sparkling orange drink. What IS that, I asked. An Aperol spritz, of course, the color of the red-orange sunset shortly to appear on the horizon. Consisting of prosecco, a bitter-sweet amaro and a splash of sparkling water, this refreshing aperitivo couldn’t be simpler to make.

The spritz (spreetz in Italian, sprits in English) is rooted in northern Italy, where Aperol and prosecco are made, but its popularity has spread throughout Italy and the world in recent decades.

The orange Aperol spritz still rules, with its red Campari cousin a close second. But we also tasted clear spritzes, green spritzes, darker-hued spritzes. Bartenders are playing with the formula, mostly by varying the bitter-sweet amaro.

The Hugo (OO-go). I first ordered this transparent spritz, owing its floral taste to St. Germain, in a Campo de Fiori bar. The Hugo turned up in other places, sometimes with Sambuca as the liqueur. Not quite as sweet as an Aperol or Campari spritz, it should be garnished lavishly with mint and perhaps an orange wheel.

Spritz bianco. The spritz bianco is wonderful when made with a good vermouth–pale in color, slightly sweet, aromatic. If it’s a vermouth you’d drink on its own, go easy on prosecco and perhaps skip the sparkling water. Bordiga is one Italian vermouth brand I really like and Antica Carpano, more widely available, is good too.

Green spritz. Taking one for the team, my husband ordered a green spritz in Ravenna. The liqueur responsible for the hue is called P31. It’s related somehow to absinthe, according to the label, which also reassured us that natural ingredients are responsible for the vivid green color. We were not fans of this novelty spritz, so I don’t recommend seeking out a bottle of P31.

Bartender-created spritzes. We spent an hour in the cool recesses of a Padua bar, watching our bartender devote the same passionate energy to every spritz: dropping ice in the glass, measuring the makings, running a strip of citrus peel around the glass rim, adding garnishes. His proudest creation, which I’m calling the Amaro Bomba, brings in more complexity by adding a little Vecchio Amaro di Capo as well as Campari. A touch of tonic instead of sparkling water tempers the bitterness of the Vecchio Amaro.

Most spritzes arrive in large-ish wine glasses or old-fashioned cocktail glasses, but occasionally in a highball glass. Or those enormous goblets like the ones used for rainbow-hued margaritas in state-side Mexican restaurants. I could scoff, but the truth is I have drunk a spritz in such a glass.

A few years ago, we arrived in Rome with another couple after a train ride from Venice, dog tired, and wandered over to Piazza Navona. One of us, who will remain unnamed, suffered a travel-induced meltdown. We clustered around to offer comfort, and then hustled to the nearest establishment. Yes, the touristy kind with a server inviting passers by to sit down.

We sat in silence while our bartender, Raffaello, poured a bottle of prosecco into four giant, ice-filled goblets, followed by the better part of a bottle of Aperol. Sensing that, like cranky children, we needed food, he suggested a salumi-formaggio platter.

An hour later, meltdown cured, we departed with warm memories of Raffaello.

Spritz glasses are invariably filled to the brim with ice, and that’s the right idea. It amplifies the impression of a bountiful cocktail while rapidly chilling the makings.

I don’t know any figures but it seems clear that the spritz boom has spurred prosecco production. After driving the so-called Strada di Prosecco from the Veneto across Friuli-Venezia-Giulia—–including the stretch from Conegliano to Valdobbiadene, the most prestigious prosecco area—I can attest that the land is given over almost entirely to vineyards. The entire prosecco zone encompasses nine Italian provinces.

Visiting Trieste, we learned the origin of the name. Prosecco is not a varietal, but a village near Trieste. Our guide Sonia told us that during medieval times monks brought Glera grapevines from Istria to replant, naming the wine they made after the village. They must have nailed the method, because Glera is still the dominant grape used for prosecco.

So, how to make a spritz? The standard is three parts prosecco to two parts Aperol (or other amaro) and one part sparkling water. Proportions that favor the prosecco a bit more will likely be less sweet and less bitter. You can also go heavier on sparkling water. That does dilute the drink but you could argue it’s more refreshing.

Amaros vary in their bitter-sweet ratios, so you should also adjust for that. Aperol and Campari are pretty sweet, but St. Germain and darker-hued amaros can be quite bitter and should be added sparingly. Tinker the first time around for proportions that please you. Citrus wheels—usually orange, but lime and lemon work too–are classic spritz garnishes. When the flavors resonate with the spritz makings, you might also add green olives or herbs such as mint and rosemary. 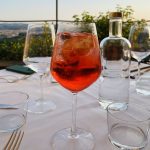 The classic Aperol spritz proportions are three (prosecco), two (Aperol), one (sparkling water). I prefer to tilt a bit more to prosecco but it's a matter of taste.

This spritz delights the senses with the fragrance of mint and the distinctive flavor of St. Germain elderberry liqueur (some bars substitute Sambuca). It's an interesting change from the usual Aperol and Campari spritz.

Make this spritz as a lighter, fizzier expression of a white vermouth that is also worth drinking on its own.

This is a more cocktail-y spritz, in which the bartender varies the standard spritz formula by combining combining Aperol with a stronger amaro, toning down the bitterness of the latter with a little tonic water. It's based loosely on a cocktail I watched a bartender make in Padua.

I’ve always loved Italian vermouth and liqueurs, known as amari, that teeter on the tightrope between bitter and sweet. They vary from one another in color, alcoholic strength and proprietary formulas of infused herbal and fruit ingredients that can number in the dozens.

Vermouth on the rocks with a twist is a standard pre-dinner libation for me. Occasionally I’ll treat myself to the more assertive flavor of Punt e Mes and lately I’ve discovered the pleasures of Carpano Antica. Packaged in an ornate tin, the latter costs 38 dollars a bottle compared to about 22 dollars for Punt e Mes and less than 10 dollars for standard brands like Martini and Cinzano.

When I lived in New York, summer was the time for Campari & soda or a prosecco spritz tinted a brilliant orange by Aperol, a less alcoholic aperitivo made by the Campari company.  Now that I live in Florida, the Campari-Aperol season goes on all year long.

I enjoy the unique flavors of these drinks but also their histories and weird make-up. Campari, for instance, originally got its ruby tint from crushed cochineal insects (vegetarians, breathe easy–they’ve stopped that).

Combine these bittersweet beverages with gin as a base and you cross over from aperitif to cocktail, a world of more powerful drinks that have their own appeal. Part of the attraction, for me, is that quite often I already have the amari on hand.

The grapefruits in my refrigerator sparked a memory of the Salty Dog, a gin drink that was a ’70s favorite for me. Skip the salt-crusted rim and splash in some Aperol to create a whole new drink, with just a little bitterness to complement its sweet-sourness (recipe follows).

Mixologists have been having fun with the Negroni, whose standard formula calls for equal parts Campari, red vermouth and gin. Campari is the constant but choosing distinctive brands of the other two components can make a difference. New York City’s I Sodi uses Hendrick’s (a Scottish gin infused with rose petals and cucumber) and Punt e Mes in its Punt-e-groni (visit their site for the recipe). Gabrielle Hamilton of Prune, also known for its Negronis, likes Plymouth gin.

In Jacksonville, Florida, Restaurant Orsay makes its Negroni with Carpano Antica. I wondered how much it would matter, but in a side-by-side tasting, the good stuff prevailed. Carpano gave the drink a long, complex finish entirely lacking in the ordinary red-vermouth Negroni.

The Orsay bartenders also tamed that tiger of an amaro, Fernet- Branca, by putting it in a gin cocktail.

First, let’s just say that Fernet-Branca is a class of its own, infused with over 40 roots, herbs and spices–seemingly, whatever the original maker could dig up. It’s a shock-and-awe kind of drink that some swear by (mostly men, in my experience) and others swear at (including me). I do a micro-sip of Fernet every few years just to confirm it still tastes nasty and medicinal, and it always fulfills my expectations.

That’s why I was so surprised that I liked Orsay’s Blackfriar Cocktail.

The ingredients were right there on the menu: Plymouth gin, Fernet- Branca, lemon juice and demerara sugar syrup. Judging by the cocktail’s color and taste, Fernet was a relatively minor ingredient–and I found afterward that many mixologists recommend using just a dash or two as a substitute for Angostura or other bitters.

When I put one together back home, I found myself upping the Fernet quantity a little. My husband is a Fernet fan and I agreed that it deserved to play a starring role, though not to dominate the drink.

There’s no end in sight for my bittersweet cocktail “research.”  All I need to do is segue from gin to rum or brown spirits.  Already I’ve seen references  to Campari mojitos, a Fernet Old-Fashioned and a promising combination of rye whisky, Punt & Mes and maraschino liqueur.

I think I’ll go cut up some fruit garnishes.

* To make the syrup: Combine 1/4 cup demerara or turbinado sugar with 1/2 cup water in a small saucepan. Bring to a simmer and cook, stirring, until the sugar dissolves. Cool; leftover syrup can be stored indefinitely in the refrigerator.